My quads are still a bit tight from Saturday’s run so I decided I needed a Hard Walk up to Boney and Sandstone Peak. I filled up my Atmos 35 with a gallon and a half of water and energy drink and started up the hill. Passed by some Velvet Ants and a 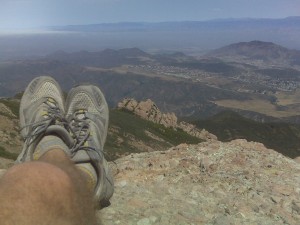 newt. A nice surprise but I was only getting started with the wildlife.
I did some trail cleanup on the way up to help with the never-ending flow of rocks in the trail and the eventual water damage that would occur without berms or gullies. Took in the big view on the top of Boney with my feet extending into the landscape like a portal to freedom.

Make my way through some rocks and stopped in my track only to see a California Mountain King Snake motionless on the trail. I was awe-struck. I have seen only a handful of these in my lifetime. This was the first I had found i this park in 20 years of hiking and running on these trails. I snapped some pictures and videos and grabbed him ot get some close-ups. What an amazing animal. This species is restricted to steep canyons and cooler temperatures. They are secretive and at most 3 feet 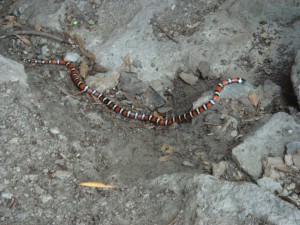 in length. This one was about 2 feet long and despite the cooler temperature of the area was quite fierce.

After snapping some photos I let him continue his crawl under a rock.
On to Sandstone Peak. Met a guy up there and chatted a bit then back down the trail where I stashed my rem

aining water for a cache I will access later in the week.
I ran down Chamberlain Trail toward Sycamore where I ran ito a group of 9 senior citizens make thier way up the hot trail. I was surprised too see them. They were spread sout and the last guy was having some major difficulty getting up the trail. I offered him water but he just said his legs were tired and he was out of shape.  I felt for the guy and I could tell he had a great desire to complete the hike.  He paused, gathered his energy and forged forward.  I was proud of him as he had to be in his late

60s or older.  His companion remained at his side despite the speed of the faster hikers ahead.

I continued down the trail and stopped to fill up my water bottle at Danielson Ranch.  Just as I was going to turn on the faucet a lizard that was in the sink started frantically trying ot get out of the sink.  He couldn’t get any traction on the porcelain and just spun his wheels.  See this video of him and what happened next.

Back up The big BB hill to the car for a nice hike/run.

This entry was posted in hiking, Running. Bookmark the permalink.