Sisquoc Loop – This is my favorite run in the San Rafael Wilderness just north of Santa Barbara California.  This route starts at Nira Campground and proceeds counterclockwise following Manzana Creek into the drainage of the Sisquoc River to South Fork Camp, then heads down stream to Manzana Schoolhouse Camp and back to Nira.  This 45+ mile route takes you through some of the most primitive wilderness in Southern California with navigation challenges at the stream crossings along the Sisquoc River. 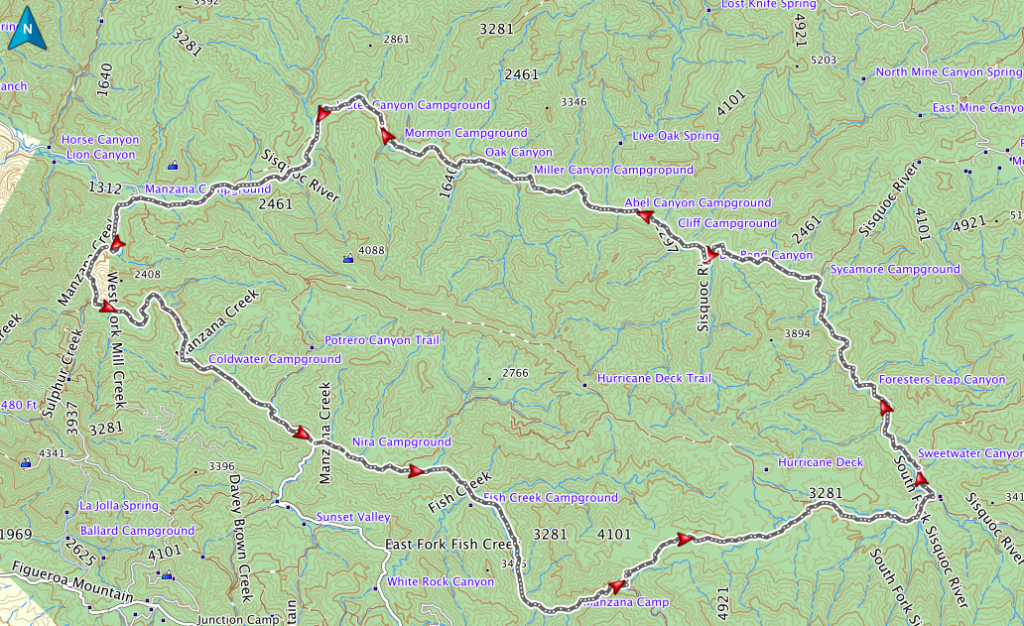 Map from my tracks in Garmin Basecamp

I have backpacked most of this route and run the entire route in a few years ago.  The last run was on a warm day that got the best of me and my running partner with the last 10 miles a death march for me and taking us over 16 hours. I have been committed to going back to this place and repeating the run in less time and more comfort.

I scheduled the run for December 20, 2014, one of the shortest days of the year, and put the word out for self reliant runners with a similar passion for backcountry adventures.  I had one taker so the plan was on.  A few days before the run my running partner got sick so I decided to go alone.  This approach is not to be taken lightly in this region, so I took a few extra items in my pack including a Esbit stove, soup, extra jacket and tights in case I had to spend the night.  I carried a Spot Tracker just in case and to let friends I shared my plans with to follow my tracks. 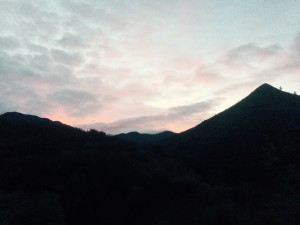 Starting a little after 6AM on Saturday morning I ran along the Manzana Creek passing a number of camps with water at all the creek crossings from the recent rains following  a few seasons of drought.  Pink and gray skies greeted me back to the wilderness once again.

A short climb just past the turnoff to Big Cone Spruce trail took me to the high point of the loop with a snow laden north face of San Rafael Peek in full view. 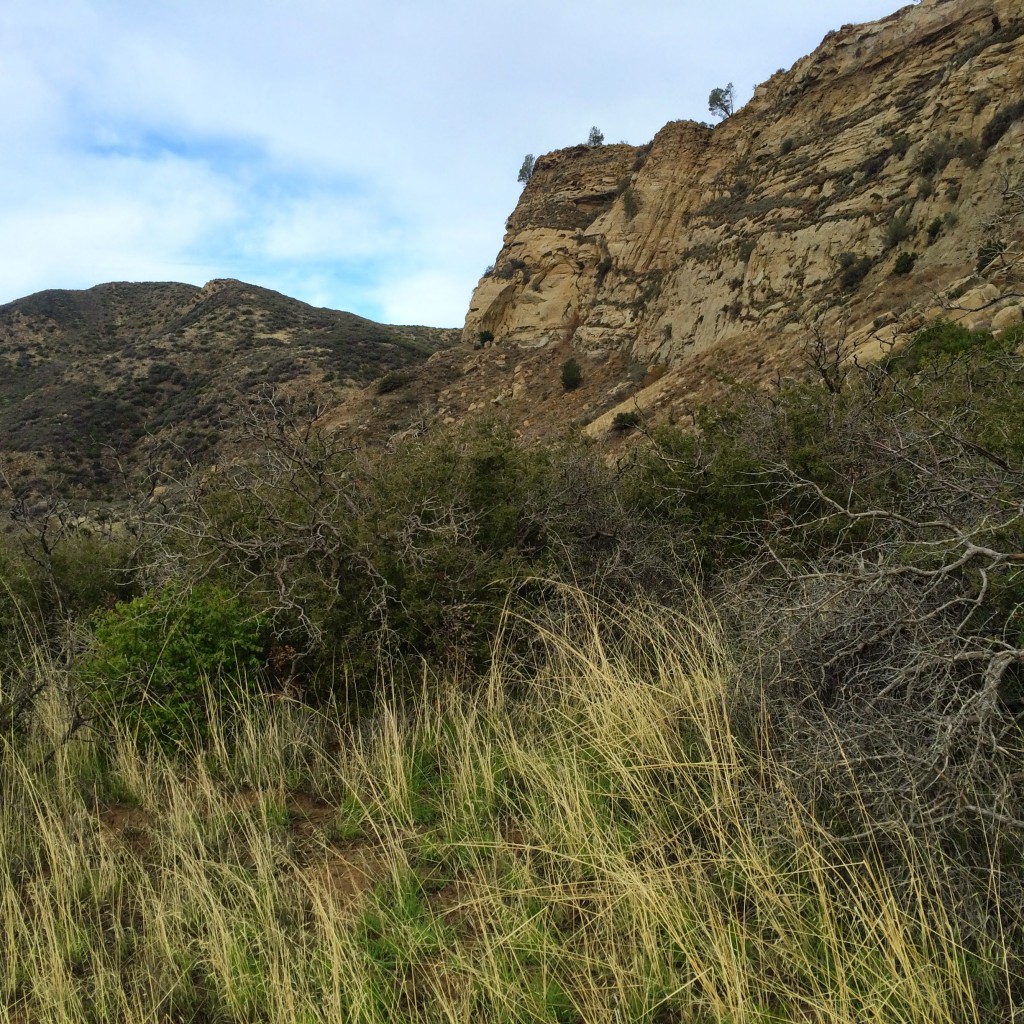 Bluffs filled with holes from wind and water erosion 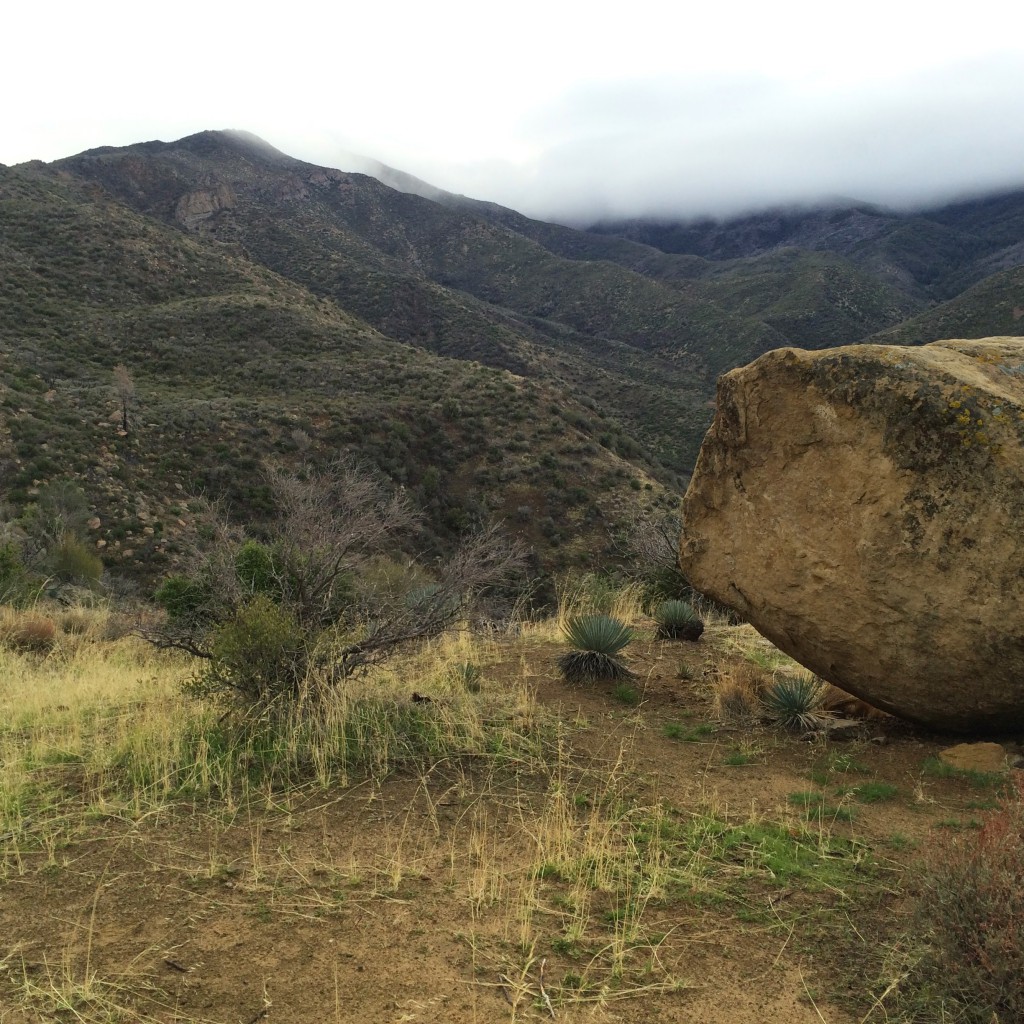 Almost at the top of the climb just before Alcove Camp 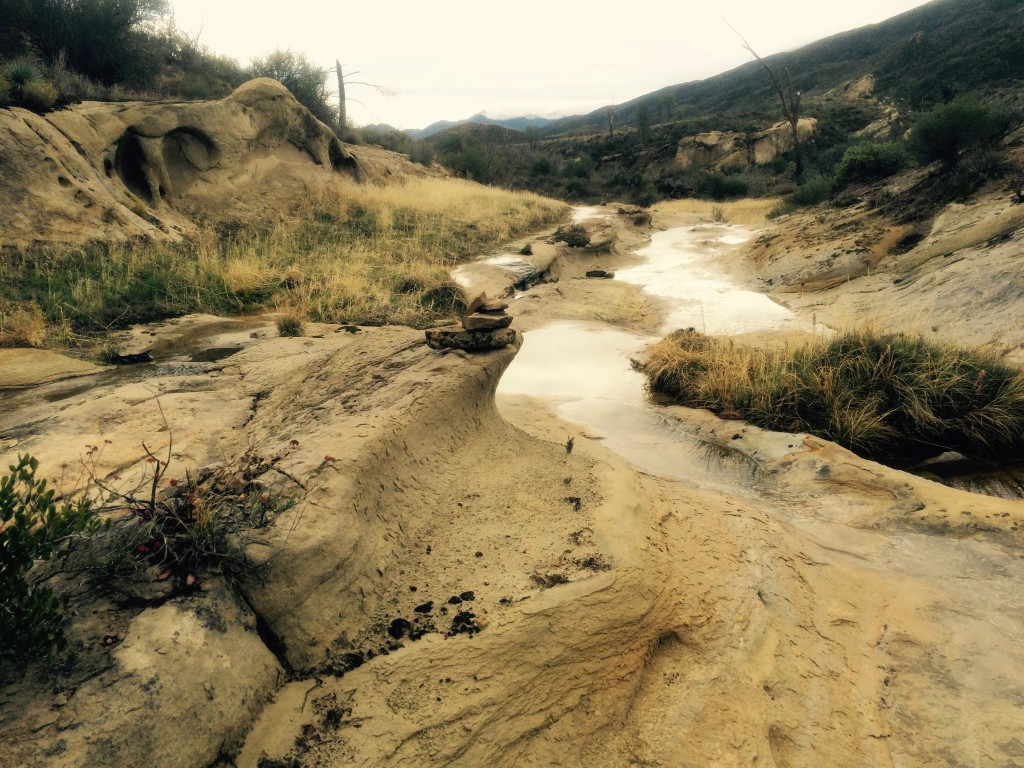 Lot of run-off from the last storm. Not sure how long this will last. 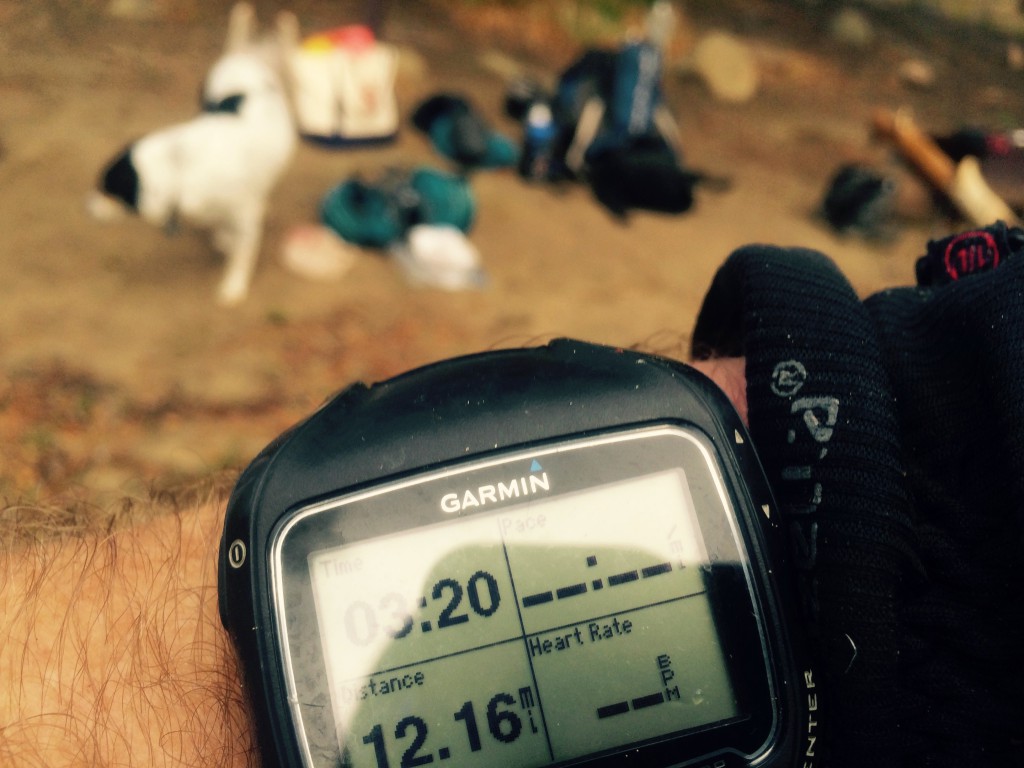 Continuing past White Ledge Camp (12 miles in 3:20) where there was ample water and a couple of backpackers and one mouthy dog, I made my way down the hill to South Fork Camp. 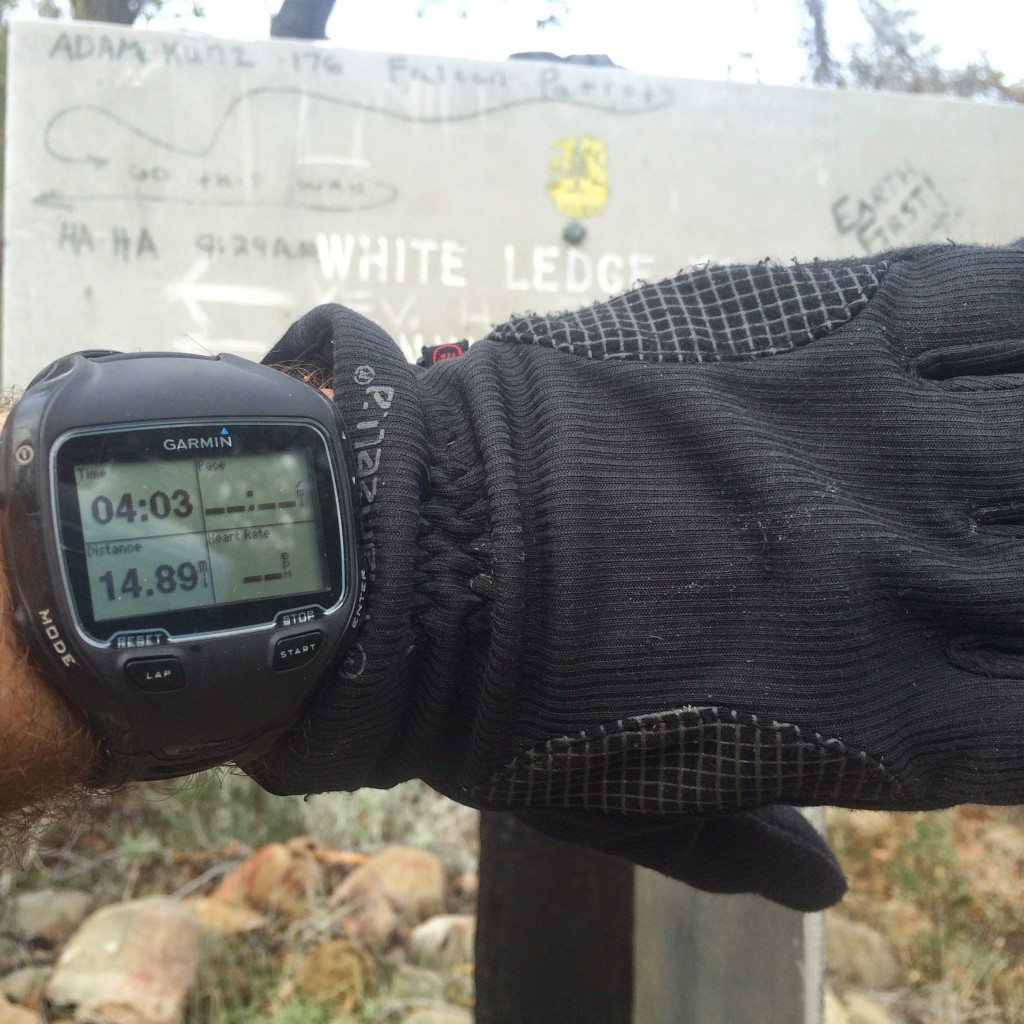 When I hit the junction of the trail to South Fork Cabin (15 miles in 4:03) I decided not to visit the cabin as it was a few hundred yards and one stream crossing out of my way so I just went left to the creek to fill up on water.  I downed about 40 ounces of water int he first 4 hours to get here.  The river was flowing well and there were remnants of some serious flooding by judging the debris fields on the banks of the river.  However I was uncertain water would be found for the rest of the run so decided to fill up 3 bottles and 2.5 liters in my Platypus using my Sawyer Mini Filter.  Probably more than I needed but stopping for water takes time and I would rather just keep moving.  The pack was heavier than really needed but it will help me train for the 100k race in February. 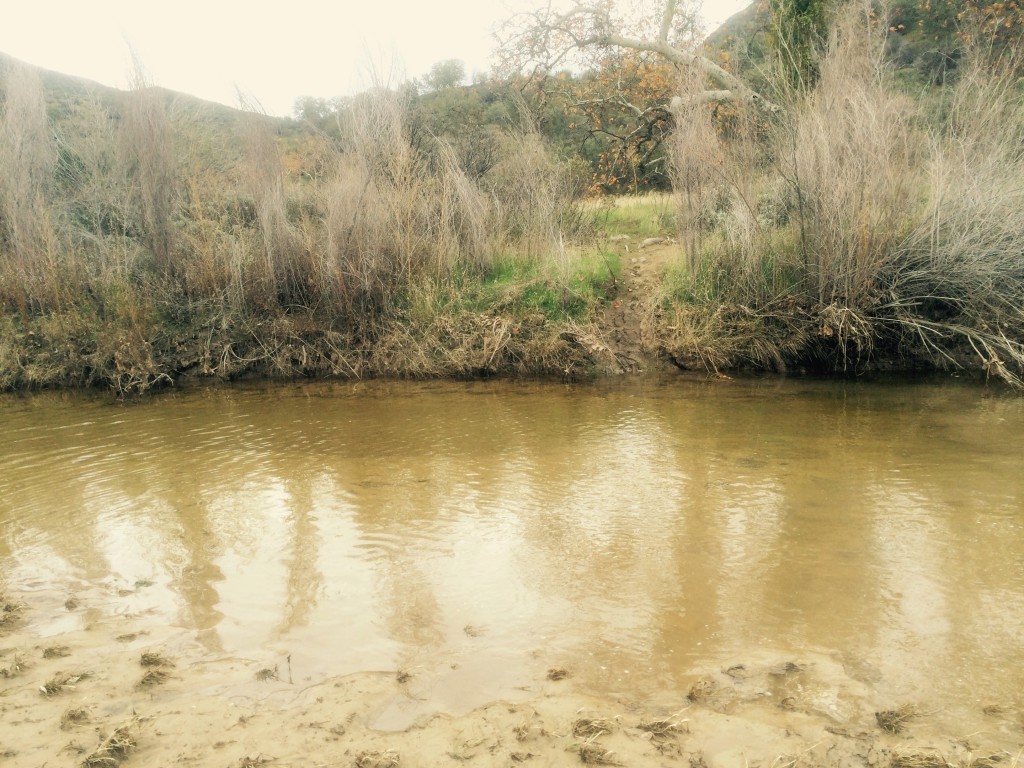 Now above the north side of the Sisquoc River there was water flowing at Forresters Leap Canyon.  This was a good sign for more water down stream. 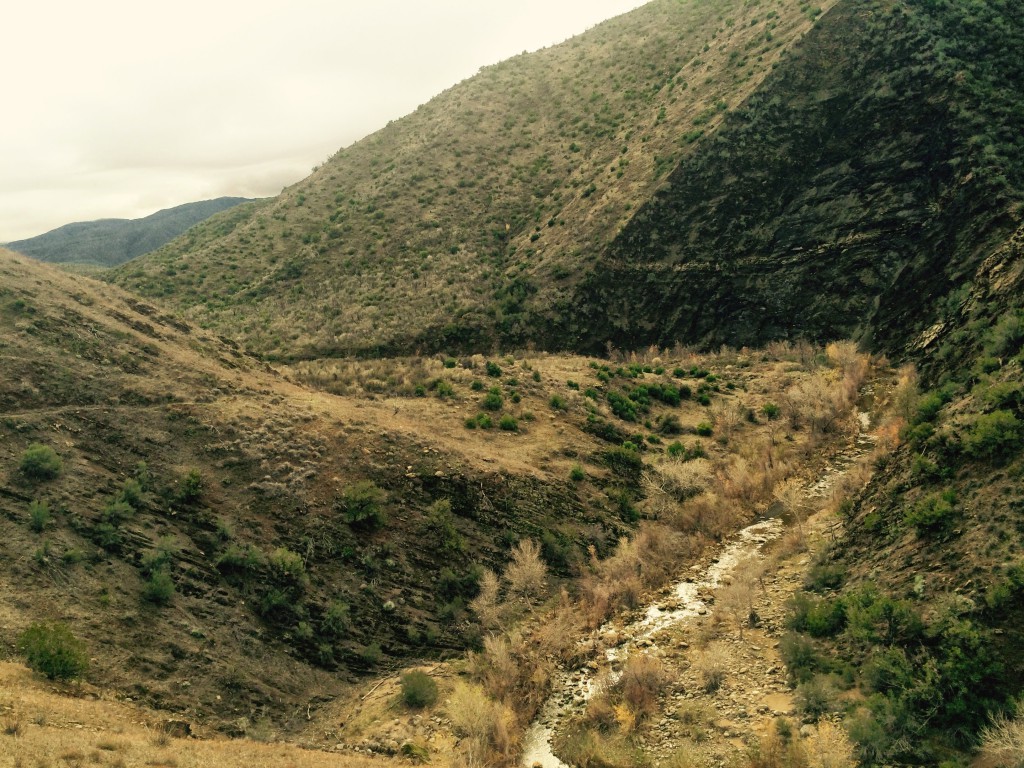 The narrow cliffside trail of shale had a few slides but all were passable but could use some maintenance.   My feet stayed dry until the crossing just before Sycamore Camp.  I expected that this was to be a simple wading of the stream and it was only knee deep.  The entry to this crossing was an unexpected slippery slide of mud that almost caused me to fall in the river.  A reminder that things can take a turn quickly while traveling alone in the wilderness.  I managed to stay upright and then arrived at Sycamore Camp, a lush green encampment with lots of shade and hitching posts for the horses. 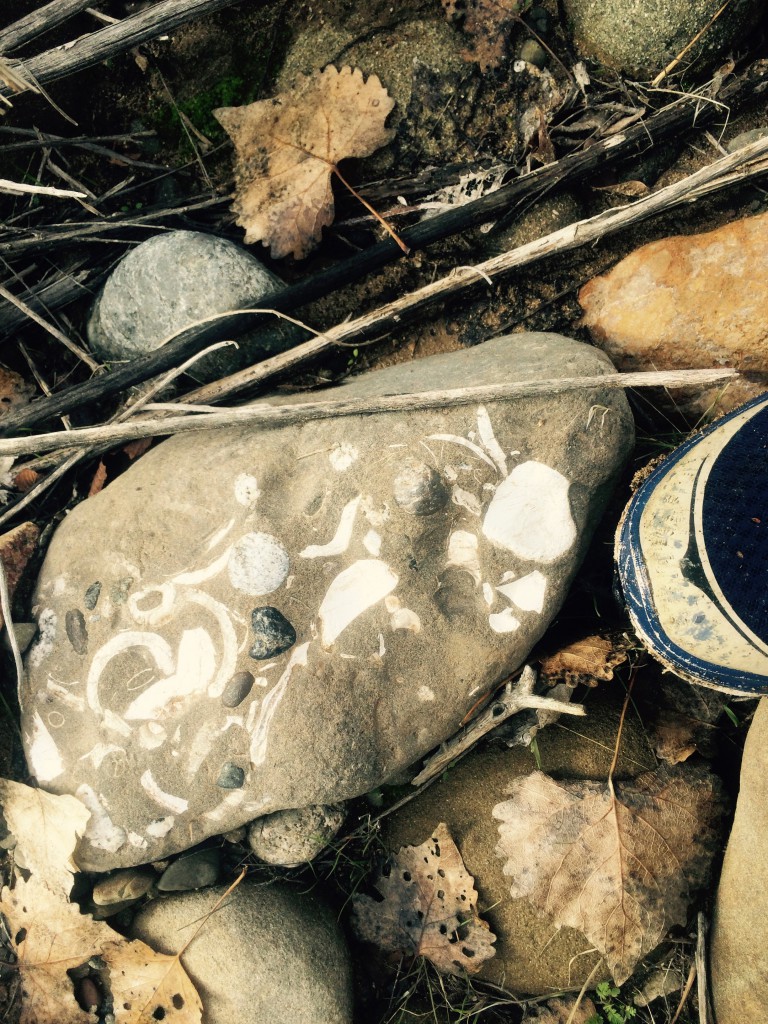 Fossils in the stream bed were a nice find

After Sycamore Camp the trail quickly degrades and there are fewer rock cairns and flags to help guide me.  I took my time scanning the terrain for any signs of passage.  Mostly I stayed on the trail but had some sections where stream crossings were choked with debris from the floods.  One of the joys of going off trail, intentionally or not is I find things I may not normally see.

Like these fossils and abear jaw.  The bear remains were below a cliff not far from the stream.. How did this bear die?  Could he/she have fallen off the cliff ?  We will never know. 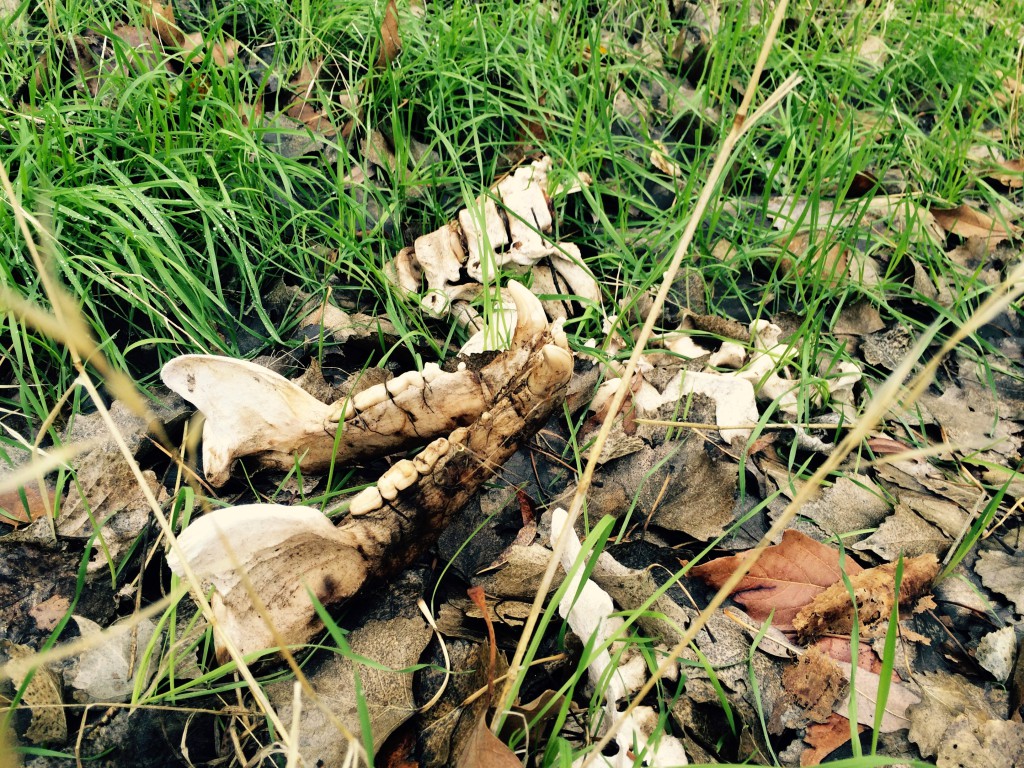 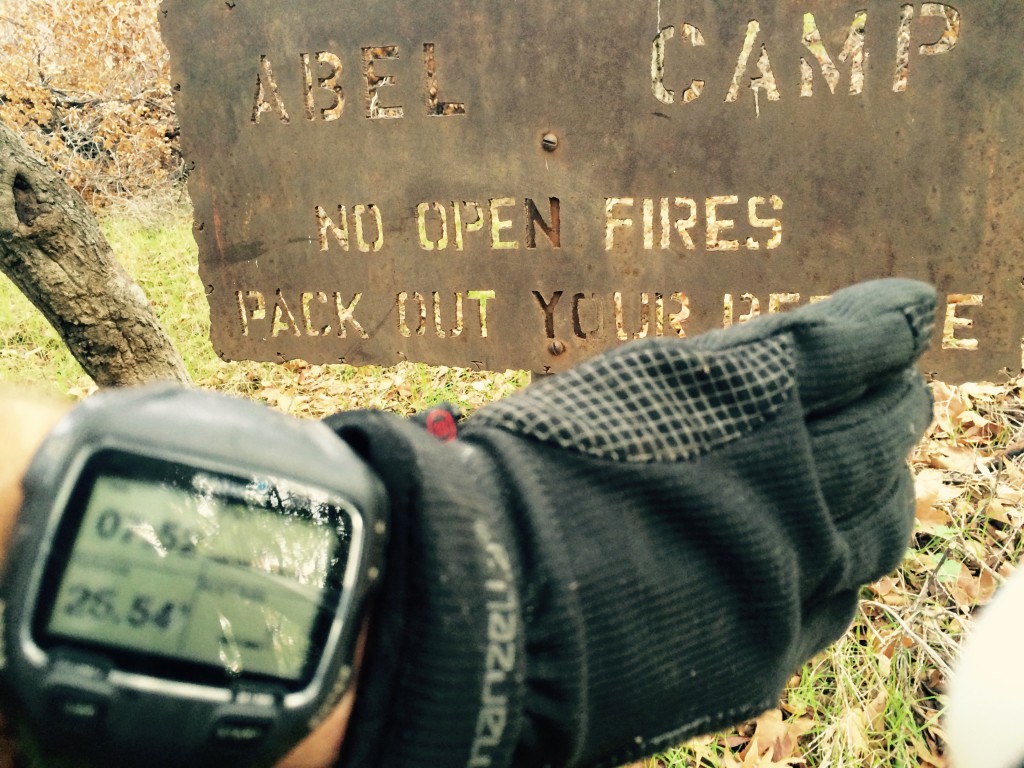 By the time I arrived at Abel Camp (25.5 miles in 8 hours) I slowed down to 2.5 miles per hour.  Not that I was trying to run a Fastest Known Time (FKT), and I have no regrets in stopping to see the interesting things on the trail, taking pictures and trying to eat and drink the contents of my pack to make it lighter. 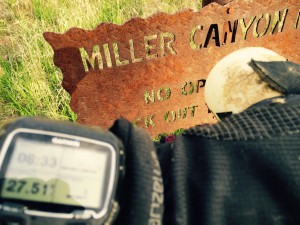 The section of trail from Abel to Miller Canyon (Mile 27.5 in 8:33) also had its route finding challenges.  Miller Camp (had a wire enclosure I walked into and had to worm my way through this fencing to get through.  The trail through here is pretty flat and now opens up for some continuous running through some green fields once planted by the early settlers. 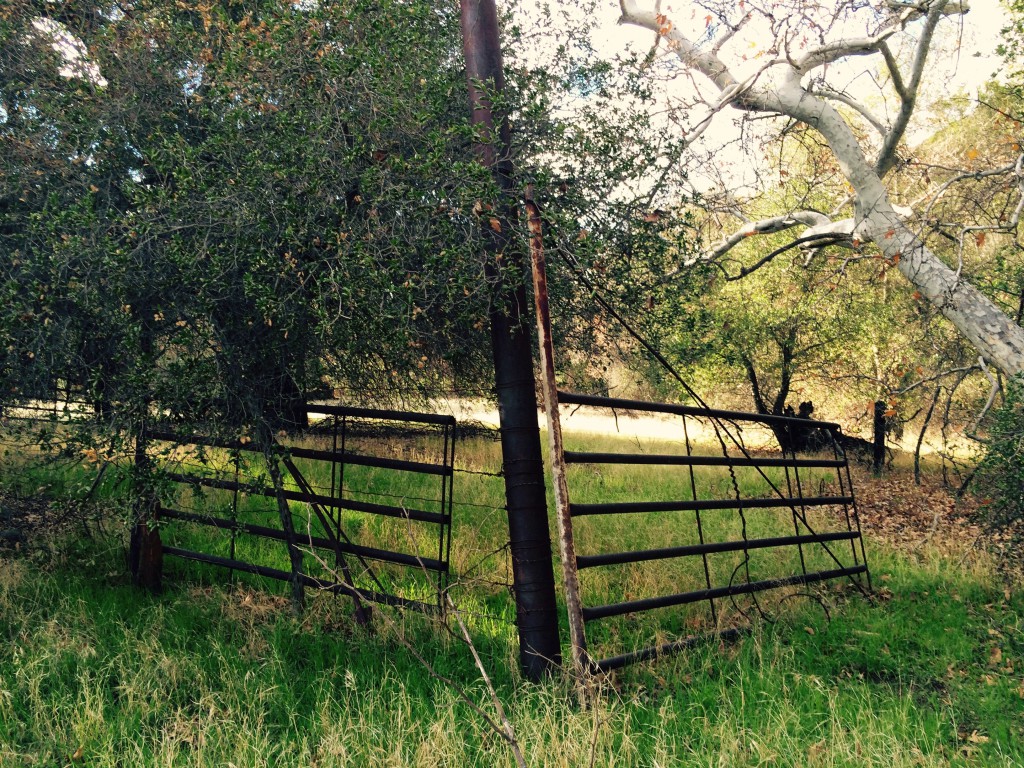 As the sun started to set the colors started to pop in the grass and the trees and got this shot that does not do the scene justice. 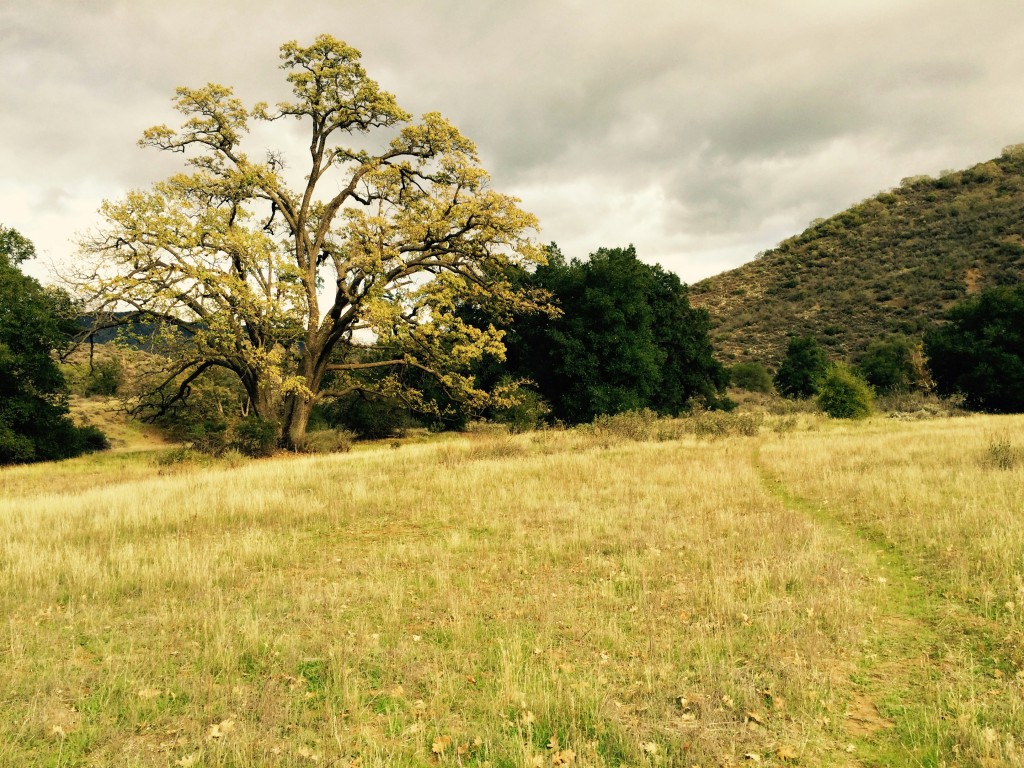 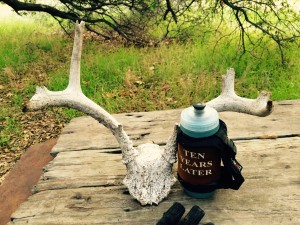 On to Mormon Camp and more animal remains and I stopped to enjoy my holiday salami I snaked from the fridge that was supposed to be a stocking stuffing.  It was truffel infused and tasted so good. The extra fat helped to fuel me up for the remaining part of the run. 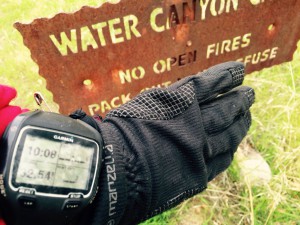 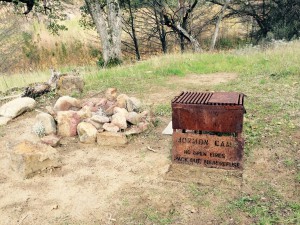 At Water Canyon Camp (mile 32.5 in 10 hours) I started to try and make as much progress as I could while I still had day light. Section of the trail allowed this until I lost it again and decided to just run in the stream bed.  The stream bed had evidence of flooding but the water was gone short of a few puddles and mud patches. 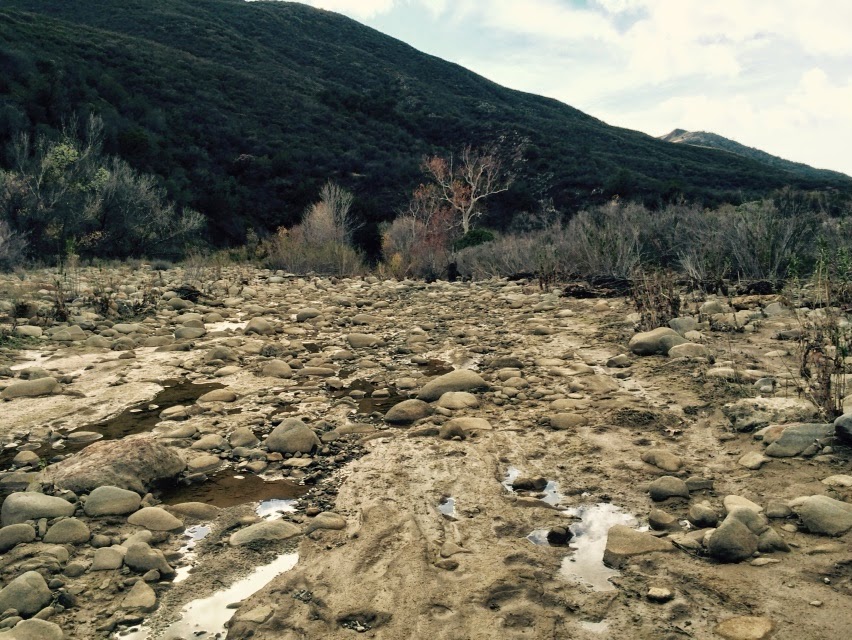 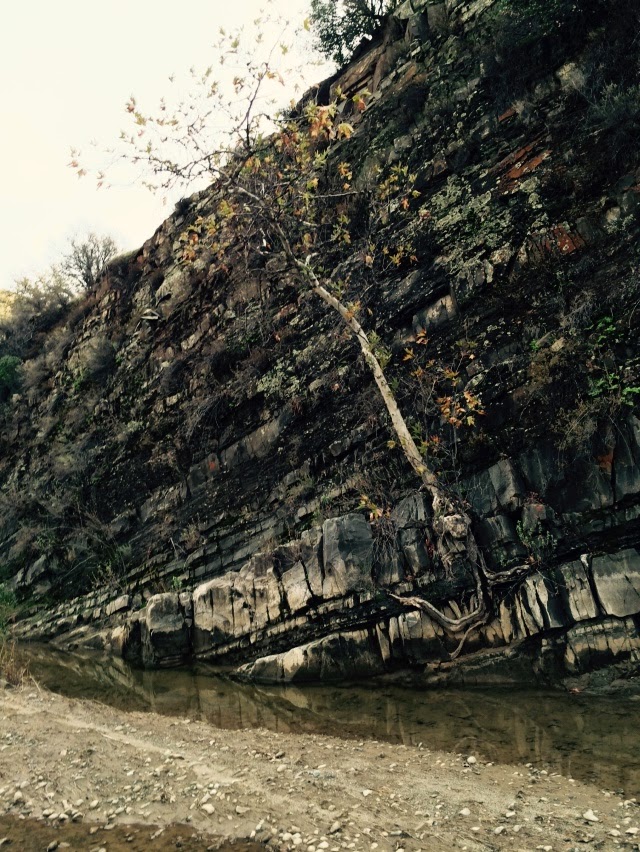 This hardy tree will not yield to the rock.. That’s one stubborn tree!

The trail starts gaining elevation once it leaves the river and heads over to Manzana Schoolhouse Camp.  This takes me through some forests with wispy hanging moss from the trees.  A bit eerie at night but pretty cool to have them lap at my headlamp through the failing light.  Stopping at the first picnic table at camp I fueled up and started down the road. This road has a number of junctions and signage is ok but could be better.  I found myself checking the map and GPS just to make sure I did not run any extra miles. Found a few toads on the road. 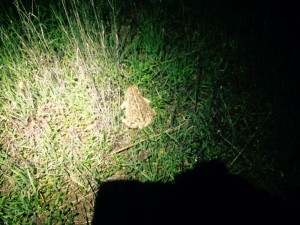 I met 4 guys and a dog hiking in to Coldwater Camp and stopped to talk about the route.  Not sure they fully understood what I just ran but they wished me luck and I moved on. 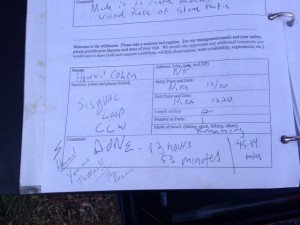 The road crossed the creek a number of times and then turned to singletrack with a few ups and downs eventually coming out on Sunset Valley Road.  Another quarter mile and I was at the campsite and ran to my starting point at the backcountry signing register to note I finished (45.8 miles in 13:23).  Note the photo of the register was taken by the “Beeman” after he wrote a comment and sent me this picture.

The Sisquoc loop is a great journey whether done in a day or over a number of days enjoying  this wilderness area.

One Response to Running the Sisquoc Loop